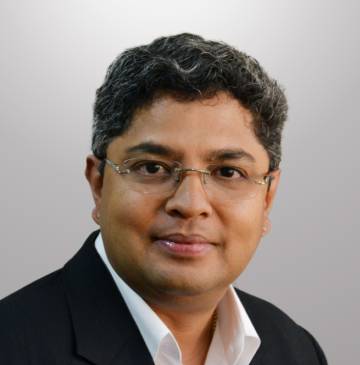 Saikrishna Rajagopal is the Founder & Managing Partner of the Firm. Sai graduated from the National Law School of India University, Bangalore and was admitted to the Bar in 1995. In the past 27 years, Sai has emerged as a highly reckoned and ranked counsel associated with groundbreaking litigation and an acknowledged reputation for being an outstanding arguing counsel.

Sai has been associated with an extensive array of civil, commercial and criminal litigation in India for various fortune 100 and fortune 500 clients including many Indian clients. Over the past many years, Sai has been associated with some of the leading Intellectual Property cases in India touching on a diverse array of topic ranging from pharmaceutical patents, telecom standard essential patents and related FRAND issues & patent infringement litigation, competition law/anti-trust issues, anti-piracy litigation and the issuance of court-mandated guidelines to streamline admissibility of investigative evidence in relation to Anton Pillar orders, safe harbour provisions, and challenges to provisions impinging on these safeguards, defamation/trade libel in the context of SLAPP litigation, etc.

Since 2005, Sai has been featured as a highly ranked professional in various leading ranking journals. Since 2007 Sai has featured as a ‘Leading Individual’ in Intellectual Property by the prestigious Chambers Global – Guide to Leading Legal Professionals of the World in its past editions. In 2013 Sai was ranked as the sole “Star Individual” ranked professional for IP Litigation by Chambers & Partners – Asia Rankings.

Sai has chalked up an impressive list of “wins” in the arena of IP litigation ranging from complex trademark issues including the use of trademarks in films, use of trademark law in relation to defamation cases, etc. in 2014 Sai lead the development of jurisprudence in relation to the court-ordered blocking of offshore pirate websites. This campaign has resulted in the blocking of thousands of pirate websites as well as in 2018, with courts issuing a unique ‘dynamic blocking injunction’ which now provides rights holders with an efficient and balanced process to include additional variations of pirate websites seeking to avoid blocking injunctions.

Sai is also active in the lecture circuit and has spoken at several conferences both in India and abroad as also at premier national institutes like the National Institute of Design at Ahmedabad, the National Police Academy at Hyderabad, the Delhi Police Training School, the National Customs and Narcotics Academy at Faridabad, and the Central Bureau of Investigation Training Academy at Ghaziabad.

Sai has also played a leading role in the development of IP Policy being involved with as an expert witness advising the Indian Parliamentary Standing Committee overseeing the proposed amendments to the Copyright Act, 1957, on their impact across a variety of sectors.